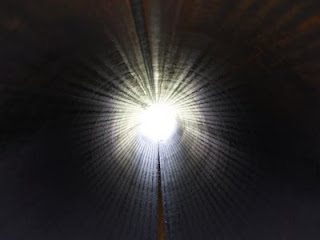 A sense of loss for someone I barely knew; a sense that something has left me… gone far away, never to return; a very strange sense of vacuum - so often did my eyes well up, but not a tear drop rolled down; so many fleeting memories flashed by- things I never remembered, never even probably registered suddenly presented themselves before me.

The last 2 days brought before me- in such close proximity, an event of life that I never really thought about, sometimes even joked about and more often than not thought I was prepared for… but then, no one can ever really be prepared for it… it is an event that walks in on tip toe and goes away with a bang. I am left with a strange sense of emptiness- a void- called Death.

They say death is a thing of grandeur; it suddenly brings to life a host of relationships that you never you shared with the one gone-by. I so totally agree. For someone who has seen death at workplace so often, I thought I could sail through this one… after all, I have seen blast victims, flyover collapse and dead bodies strewn around me, thought it always disturbed me, left me unnerved, I guess work pressure was so high that I never really had the time to grieve. Of course, images of the blast sites haunt me until date…

But, then I had never seen death of someone ‘my own’, ‘related’ etc… and when Saturday brought me the news, though I kind of expected it, something in me suddenly went still. After I saw him lying there, lifeless, limp, still and when they took him away and I knew I could never see him again, something changed… a realization that between the first in-breath and the last out-breath, this phenomenon called life, deserves to be lived to its fullest. Each breath to be utilized to its optimum and each word and action to bring more relief on this planet, we call home.