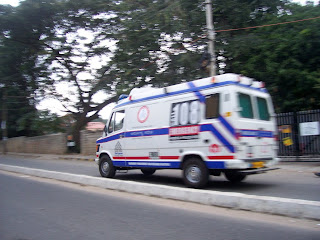 Picture this: - A desolate, poorly lit street, late night and the only noise that interrupts the din of the fireflies and the rustle of the leaves is the faint sounds of music that the breeze steals from a speeding car. On a night just like this, not so long ago, I was driving back home, my mind meandering through the web of tasks set before me for the next day. My musings came to a crashing halt as I saw before my very own eyes, not more than 200 mts ahead of me, a motor cyclist collapse- the bike fell and the biker was flung off the bike on the other side of the road. Indeed a heart wrenching sight. All of this within a split second. Even as I slowed down to pull over and help, the parallel line on my brain was sending me warning signals of how unsafe it can be for a single woman to step out in the dark, especially on a desolate street. All of this happened within the batting of an eye-lid. Through this all, I saw another man, stop his bike and help the man who had fallen off… now, this is what makes me really proud to be and Indian, the innate humanness that every Hindustani has. An act that stems out of wanting to help another, simply because that is the way it has to be, not merely as a sense of duty, not even out of pity… but just doing it, cause it’s the right thing to do. Anyway, the accident victim couldn’t stand and from what I could make out; he had fainted and of course, sustained severe head injuries. Almost sub consciously, I reached out for my mobile and dialed the much publicized 108. Those ambulances that had many a time beaten the media OB Vans at every blast site, at every flyover collapse… I had seen these 108’s everywhere, had even done my bit of interviewing and publicizing, but, this was the first time that I had even dialed that number and even as I dialed, the cynic in me said, “now, we’ll know the truth. Is 108 all hype or does it really work”. “Namaste 108” a calm and reassuring voice greeted me. I was panic stricken and hurried and desperate that some help reach the accident spot. Through the jumble of words that I blurted and directed them to the location, the voice on the other end, remained, calm, composed and reassuring. He even got me conferenced to the nearest ambulance and suggested some doable first aid. When I told him that I hadn’t even gotten off my car, he was still reassuring and even supportive. Five to may be ten minutes later, as a crowd of passersby had gathered around the accident victim and his bike was successfully moved from the middle of the road, much to my relief, I heard the siren of the 108… It was the first time I had to call an emergency help line… I hope it’s the last too. But given my experience with the 108, I must say that it is indeed heartwarming to know that ‘help is really only a call away’
at 6:37 PM

Meena's mom had taken ill due to a sudden drop in sugar level and had become unconscious. I called 108 and they arrived under 15 minutes, the paramedic in the ambulance dialled in the control room, took instruction and started off on treatment and helped her move to the hospital within the next 10 minutes. All in all, we were in the emergency room within 30 min.

The irony of it is unlike all the other corporate honchos who preach, Raju did a yeoman service to the general public!

@ Raj- Raju did do a great service... strange are the ways of fate though. honestly, the dial 108 was an expereince I will never forget

I am no judge of who's more humane than the other, but I don't see this as innate humaneness that only Indians have. I've always believed that humans are intrinsically humane. I read somewhere that humans naturally feel pity towards each other, but it's reason that corrupts, and forces us to look elsewhere. I've never called 108, or an ambulance (except that one instance when Narayana had fainted, you know that story), but from your account, I do feel proud that we have a service in Indian cities that rivals 911. In all the chaos of our roads, it is reassuring to know that help can still reach within 10 minutes. A short account of how these 108 guys are trained, here: http://www.travelpod.com/travel-blog-entries/martysb/1/1219594020/tpod.html

i think its worth sharing a article from one of those magazines...
A team from US was invited last year to analyse the efficiency of 108 Vs 911. They were happy to declare that 108 is performing far better than 911, with the given infrastruce, population and road conditions.
We should be proud of this service being adopted in our State AP. hope this will flow to other states as well....

@ Laxmi- wow! I didnt know that... thats really amazing! Thanks so much for sharing.

@ Pratap- that link to training was extremly interesting. I did go through it.
As far as the humaneness is concerned... I only pointed it out cause unlike in the West, where the law aids the witness to an accident, in India... people are scared of the implications of being involved... so when someone comes forth, not thinking about those implications, thats when I thnk humaneness wins... and yup, like you said, that might be applicable world over..