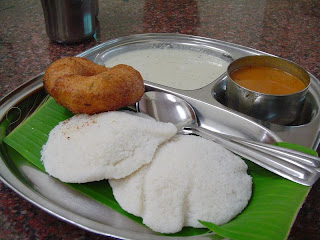 “Idli, Vada, Masala Dosa, Plain Dosa, Mysore Masala Dosa, Pongal, Upma, Uttapam, Onion Uttapam, Tomato Uttapam, Cheese Uttapam, Peserattu….” He rattled away in that low, slightly nasal voice. Into my mind rushed vivid images from the past; a past that matched image to image, word to word in fact pixel to pixel with the present! The ‘Family Section’ of one of those old time restaurants. Cheap wooden tables painted in a strange wood color. Chairs with straight backs and small leather covered cushions for seats. The clanking of steel utensils welcomes you. Settle down for a bit and you’ll identify a peculiar buzz. A little more attention and you’ll find the culprit in the pedestal fans hanging on the walls at diagonally opposite corners of the room. Thankfully, the door opening into the interior room/kitchen or whatever swings open and closes noiselessly. Else, the regular entrants would have created a riot enough to ensure that you jump out of your skin every time they exit! Enter: A portly waiter; wearing a slightly crumpled, but clean red and grey uniform. A neatly folded patterned hand towel on one shoulder; a ghastly, unclean steel tray in the other hand. A toothbrush moustache shadowing his tobacco smeared teeth and a broad smile that lends an air of warmth and friendliness to the otherwise drab surroundings. With one look, he’ll know which language he should talk to you in- Telugu (and today, it is of importance, which dialect- Telangana/ Andhra!) or Hindi (or rather a brutally massacred dialect of the language, but Hindi all the same and we’ll let it pass simply, after all it’s the thought that counts- doesn’t it?) or English (which means, monosyllabic- yes saaaaaaaaarrrr or no saaaarrrrrr or bill saarrrr). The odd one-of waiter might even venture into Kannada or Tamil. If you aren’t sure about your order, he’ll help you figure that one out. If you are a regular, he might even ask about the rest of the family… He won’t write down your order. He’ll simply commit it to memory- no matter how long your order might be… he’ll rattle it back to you with the same ease that he did the menu! You’ll feel enough at home to be able to put your feet up on the chair and sit crossed legged. Yet, you’ll know that you are expected to leave soon enough, not because he’ll hover over- Nope! He has no time for that. Simply because that sense of urgency and action is so high there that you’ll know, you’d better leave. Within 5 minutes your order will be at the table. His fingers will not be dipped into the water glasses, but the glasses won’t be sparkling clean. It’s a sign of cleanliness of the glasses, if there are enough water droplets outside the glass as many as inside it. :) Don’t ever peep into their kitchen, you’ll probably faint- unlike the star-hotels, you’ll find many aluminum tins, lots of grime on the walls, sticky floors… but these kitchens are where you’ll find the most delectable Indian cuisine… A little plastic red dish will bring the saunf and the bill, a scrawl that for once you won’t have to dread- Rs 60 for 3 chai and one plate idli-vada. All piping hot and extremely delicious… There’s such an old world charm associated with these hotels… fast disappearing, these are some of the few places where feeling at home isn’t such an expensive affair; where being a regular means you actually share a bond and a relationship, not just with the place, but more so with the people who make the place.
at 3:59 PM

I have told you many anecdotes about the hotels back home, in TN. I remembered a good one that I always cherish, after reading this :-) I had just had one of the best, sumptuous and delectable dinners(complete with appam and coconut milk ;-) ) at one of the gazillion Saravana Bhavans in Chennai. The waiter brings me the bill and I noticed the total had come to an odd "65.75 Rs". Apart from marvelling at how I had had an awesome experience for so less, I also wondered how the cashier will handle the 75 paise. I expected it to be rounded off for sure. He surprised me by handing out exact change, including a 25 coin. What's more, he did not throw it carelessly across or even lay it on the counter. He placed it in my hands, with as much care as though he was serving the first customer of the day. I felt pride at that moment, and a strong sense of belonging. They really do believe that serving food is to serve humanity as a whole! If not with anything else, I am sure you will enjoy the food experience over there next weekend ;-)

@ Pratap- I just looooved the Appam and coconut milk... want to go back to have more...

Hotels are really specific with their amenities.