The art of mixing 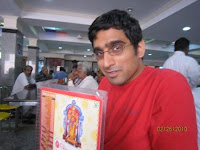 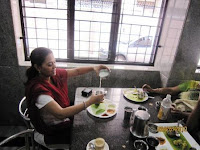 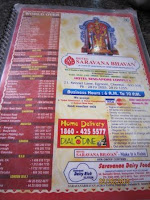 Who said that mixing is an art that only barmen distinguish in? The ability to mix well, the style of pouring the drink from one glass to another… all of this is not as modern as it seems. Nor it as western! Think about it. Isn’t mixing a tradition in almost every South-Indian family? Brewing the right blend. Filtering it. Steeping it until the aroma is just perfect. Again, a practice followed almost religiously in most South Indian households. The piping hot drink is then served in a conical steel tumbler placed in a little steel bowl. Then, begins the process of mixing… pouring… After all, that how filter coffee is drunk and that’s half the fun! In my 24 years of living in Bangalore, and I must apologize as I say this, I never drank coffee, and though fascinated by the mixing process, never mixed or even poured some masala milk. But all of this changed in the not so distant past. I walked into Saravana Bhavan (another first for me). I’ve moved out of Bangalore almost 3 years ago and shifted to Hyderabad. The innate South Indianess of Saravana Bhavan struck a chord. The long stemmed steel tables with marble/granite tops, the aromas of idlis, dosai’s roasted in ghee… the plastic laminated menu cards, the familiar clank of steel utensils… I was almost at home. After a sumptuous breakfast comprising of Appams with coconut milk, Idlis, Sambar Vada and of course the ghee roast dosai… I decided to have their special milk… you see, I am no tea or coffee drinker. People say I am bereft of many of the pleasures this world has to offer- but then gah! Who really cares of what the world thinks!!! So, my milk is placed on the table before me… rather thumped on to the table. I simply couldn’t hold on the steel tumbler for fear that my skin would stick onto it. Siddhartha, my loving husband, after he’d guffawed over my many unsuccessful attempts of holding the tumbler, showed me how to it. Lift the conical tumbler up, hold it at an angle, and let the liquid pour into the small steel basin… you’ll see it froth. That’s good. Now, lift the steel basin off the table, hold it at any angle and pour into the conical tumbler… Bingo! Voila! Here I was mixing the drink like the pro… I could smell the coffee from my in-laws tumblers and I could mix my milk… So, here I was, mixing milk and getting the exact same experience of mixing coffee… oooppppssss, I spelt that wrong, kaapi… Filter Kaapi!
at 3:15 PM

Meh...I just remembered my bro-in-law and I tried out an experiment two weeks back. We made panipuri ka water, added a hint of coriander leaves and lime. We mixed it with our vodka and had it with ice cubes floating :-D It turned out to be really good, and I bet it was much healthier than mixing it with coke! Hmm...I wonder if we have stumbled upon something incredible..like sliced bread! :-D

@ Pratap- vodka with Panipuri ka pani... am not sure how that tastes... in fact i am not even sure how vodka tastes... so... but hey! all you non teetotallers out there... how does this sound??? ever tried it before???