We've been smitten by the travel bug. Wanderlust has long taken over us. We can pack suitcases in a jiffy; have a knack of picking up bits and pieces of the local lingo; strike fantastic bargains at flea markets while taking in the sights and sounds of all places new. Essentially we take to the skies at every given opportunity. That's how we are, as a family- ready to undertake a yatra, explore the unexplored, search for soul, see the unseen, connect with people, wipe out boundaries and experience the world as one family. And so, when the festivals came along, bringing with them an extra-long weekend, we simply couldn't let the holiday season go by without packing the suitcases. We huddled in discussion- where should we head out for a dream vacation?


It’s been on our mind to explore our homeland, India, so we simply struck off international holidays. At any rate, a mere 4 day international holiday wouldn't satiate our greedy eyes which love to feast on new sights. It's the onset of the monsoon, the earth bathed in its virgin beauty and heady petrichor spell magic. We ran through our individual travel bucket lists and boarded many flights of fantasy. We bummed around on the beaches of Orissa and Tamil Nadu, ambled about in isolated island caves in Andaman, trekked up the Western Ghats in Karnataka and Maharashtra and ogled at the marvellous Brahmaputra. We soon figured that we wanted to go everywhere, there was simply so much to see and do.
That's when mummy intervened. She brings in a semblance of normalcy when we go over board and is our guiding light in moments of madness (both good and bad). She is the devout type and so when she spoke about Shrava masa, (the holy month of Shravana peppered with numerous festivals) we weren't sure where this was headed. Our travel hopes were going to be dashed with the impending festivals, we thought, when she broke the good news. "How about we all go to Kashi," she said. She beamed, thinking about getting darshan of Kashi Vishwanath ji, S smiled at the aromas of heavenly food wafted into his nostrils and his stomach growled at the mere thought of the place, images of intricately designed, opulent Banarasi sarees rustled in my minds eyes. Together we dreamed of sitting at the banks of Ganga ji and setting lamps afloat. How could we say no to multifaceted Varanasi? We jumped at the idea. Kashi it was. We were going to Kashi!


I have children at home, a 2 year old tornado of a toddler and a 7 month old inexhaustible infant. They are quite a handful, to be honest. Top that with household chores and the million other things a work-from-home mom has to do, you'll know that I have my plate topped up. And so, I did what motherhood has taught me to, place a call, order online, basically delegate the hard work to someone who does it willingly and does it well. It's the best way to be stress free and happy. I was clear, I wanted to a happy traveller, not worried about travel, stay and food and so, as always, I reached out to yatra.com. They are proficient, the yatra people. All it took was a 5 minute phone call to plan and book our trip; within a jiffy, in my mailbox sat our flight tickets to Varanasi (Kashi), cab details and hotel booking confirmation. Now, all I needed to do was pack and get ready.


A hassle free vacation is a happy vacation, for sure. But what adds zing to the zest are those special moments that stay etched in memory forever as smiles you can't forget. Our vacation started exactly like that. Having seated belted ourselves and ear plugged the seeping children, the flight had just moved onto the runway of the Bangalore International Airport, when a dhoti clad, red and white chequered gamcha donning grandpa cleared his throat and chanted a loud jaikara, "Har Har Mahadev!". His family and travel companions accompanied him in this chant and a smile spread across many lips. My almost asleep daughter joined in the jaikara complete with throwing her hands up in the air. Our vacation cum pilgrimage had begun.


At touch down, there was a cab waiting for us at the airport. Driving through the ancient temple town and epicentre of Hindusim, it seemed we'd entered an era unknown. We were so taken in by the mysticism of the place that when we walked into a plush 4 star hotel, we were pleasantly surprised. Even as we were settling in, Varanasi showed us that in it, opposites and extremes co-exist.


Holy mantras reverberated in the air; we soaked in all the good vibes as we walked towards the earthly abode of Lord Shiva, the Kashi Vishwanath temple. Every Hindu worth his salt knows about the temple and its significance in the scriptures. So, finding a beeline of devotes and faithful’s that too in the month of Sharavan, dedicated to Lord Shiva, came as no surprise. What caught our attention however was the number of foreigners who stood outside the temple gazing longingly, some even with a hint of reverence. One of them walked up to us, looking at the kids, said, "you are so lucky to be here, this is the birth place of Om." Not like we needed affirmation from elsewhere but hearing that made us feel so good. As we inched closer to the sanctum sanctorum, the hustle bustle of activity increased, the jaikaras got louder as did the pushes and shoves. In the few seconds we got in front of the jyotirlinga, time came to a standstill. Yes, we were jostled. Sure, people were chanting praises of The Lord of all worlds. Some of the offerings of bilwa patra and Ganga jal even found their way on our hands and head. Yet, waves of peace and clam overtook us. From all the sights and sounds outside we were inexplicably drawn inwards. Shiva made his presence felt in our own hearts. In that moment, we felt light as a feather, free of limitations and bondage, innocent, complete and happy.


A few steps away from the temple, the scene changed, as did the mood. Myriad lanes abuzz with outlets selling novelty knick-knacks, tourists bargaining, loudspeakers blaring the latest Shiv bhajans, the aroma of deep fried sweets and savouries wafting from small eateries... everything to titillate and appease the senses. After gorging on lip smacking chaat and delightfully decadent rabari, we topped it off with a special thandai. They say, bhajan aur bhojan main sharmana nahi chahiye and we followed that to the last letter. Who could be happier than a well fed Brahmin who has just had darshan of the divine? Almost in answer to that thought, we put down our kulhars (traditional handless, unpainted, unglazed terracotta cups) and saw 4 of us sporting thin white moustaches. With a belly full of giggles we walked on to drown ourselves in the opulence of the finest sarees in this world- Baneras silk sarees.


Sitting at the Dashashwamedh ghat under a star studded sky setting sail leaf boats with small ghee lit lamps, was a deeply spiritual experience. The sight of mother Ganga has an over powering effect, the millions of brightly lit lamps floating along her waters seemed like sparkling diamonds on her veil as she meandered through the city. Her waters have a deeply cleansing effect, washing away our sins and carrying a message of hope and purity. Sitting there late into the night, feeling the cool breeze against our face, staring at the full moon and sparkling stars and hearing the celestial sound 'Om' in her waters was akin to finding a lost treasure. 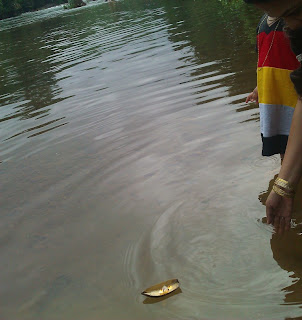 As we took the cab to visit nearby places, a sight greeted us at the doorway to Kashi. It is a memory like none other; one that left us with tears in our eyes and a smile on our lips. Entering the city was a funeral procession and followed closely by a wedding party. Both adorned with flowers, loud music and an entire entourage. Once again, the all-encompassing nature of this sacred city was revealed. A place where people want to be born, a place where people hope to breathe their last. Be as indifferent to it as you may like, but the vibrations of the city are different. A place where hundreds of thousands of people across faith, age and many other differences come together and speak the language of prayer.


What could possibly make anyone happier than to see, that no matter how filthy the lanes of the city have become, the hearts of its inhabitants are clean. No matter how contradictory it may seem, the opposites peacefully co-exist here. And while deep into the night there are stories of people going high on drugs, one can see people intoxicated in devotion all day long. Spending time in Kashi is like living through millions of magical moments strung together on a river bed of belief, love and hope. So lost was I in the mysticism and history of Kashi that had it not been for yatra.com, I would probably never gotten back in time or even worse simply not lost myself enough in the wonders of the place while dealing with logistical issues. As usual, yatra.com had fulfilled its promise of creating happy travellers on a happy holiday.


We got back to the buzz of Bangalore. Back to office deadlines, long hours at the computer screen and of course steaming hot idlis. But we never really got back from Kashi, cause the city in all its glory resides in our heart and the Kashi yatra will be looked forward to over and over again.


PS. This post is my entry to 'Creating Happy Travellers’ contest conducted by IndiBlogger and Yatra.com under the topic: If you could take your family or friends to any place on the planet, where would that be and how would you make your trip the happiest one ever?
at 7:03 AM

Truly a blissful experience!Inspires me for planning a dream vacation too:)

We must go for a vacation together... the kids will have a play date and we can hopefully chill out for a bit! what say???