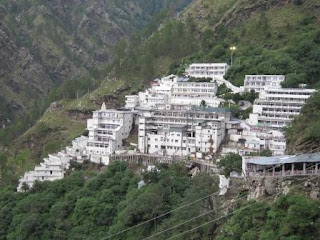 What’s a pilgrimage but a million magical moments strung together on the path of belief, hope and prayer. I’ve just returned from experiencing infinite peace on one such journey. During the monsoon months, the lean phase of mountain top pilgrimages, over 15000 people trek up the Trikuta Hills. The peak season handles traffic of over 50,000 pilgrims a day. For some pilgrims, it’s a vacation in the Himalaya’s, for others, an adventure trip but, for most it is a walk of faith. Whatever the motivation, the pilgrimage to the Maa Vaishno Devi Shrine, situated atop the Trikuta Hills close to Jammu, is nothing short of magical.
The spiritual trek up the mountains is filled with loud jaikara’s* sounded by walking pilgrims, the clank of wooden lathis, trotting ponies, the stray palkhi, the occasional dholak and groups of young dancing pilgrims. At Katra, the base of the hills, one needs to buy the Yatra Parchi or Pilgrim’s passport, as I like to call it. This parchi basically insures you against any accident that might take place in the hilly terrain. The biggest insurance is the presence of Maa, herself, but something tangible is good too, so the parchi works well. Also, unless each pilgrim has the yatra parchi, they are not permitted to begin the pilgrimage. 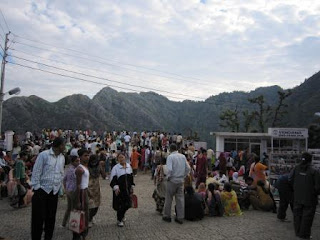 The 17 odd kms journey begins at Banganga and ends at Bhairon Ghati. With 2 major stops on the way:- Aardhkuwari and The Bhawan. The Bhawan is the sanctum sanctorum of the Mother Divine. In this Holy Shrine, the Universal Mother has manifested herself in 3 rock formations, known as the pindis. The temple does not house any idol or pictures- only the Divine Mother manifested in the Pindis in all her glory. The journey along the steep winding road itself is beyond words. While nature stuns you with her bounty, the light of longing in the eyes of the pilgrims keeps you marching forward.
Refreshment is provided in plenty along the route and many a weary traveller take a nap under the sheds.
The entire path is well paved and tiled, making the walk easier. The pilgrimage to Maa Vaishno Devi’s abode does not require a great deal of money, other than getting to Jammu and back—a very good pair of shoes and some light woolens. What it does require, however, is an investment of time and energy and a desire to dip in the pool of faith.
Standing in the Bhawan, head bowed before the Divine Mother, is an experience inexpressible. Waves of devotion and love wash over us taking with it the weariness of the walk, the fatigue of life and the troubles of the mind.
On returning to base camp, any conversation about the pilgrimage is more about the journey than the destination. Journeys, filled with aches, blisters, sprains and exhaustion from walking. I’ve experienced it myself the test of endurance. But, this isn’t just another expedition, and so, even as pilgrims struggle to walk those steep miles, their smiles are virtually unshakable. Looking back, I staunchly feel that the journey to the shrine was among the best experiences of my life.
As I narrate my experience, all I can say, is that this trek is akin to scaling the mountain of self-doubt and ignorance. When you finally summit and enter the Bhawan, you will meet yourself. A new you- emerging from within the heart of rock, refreshed and strong, breathing of peace, joy and love.
I returned home wishing this pilgrimage never ended. That’s when I stumbled upon this quote by one of my favorite authors, Paulo Coelho, ‘Life itself is a pilgrimage. Every day is different; every day can have a magic moment.’
My pilgrimage has only just begun… yours?
* Jaikara- Words of praise to the All Mighty said loudly. At the Maa Vaishno Devi Shrine, among the more popular Jaikara's are:
Jaikara Sherawali Da. Bol Saache Darbar ki Jai
Jai Mata Di
Holy scriptures esp. the Sikh holy scriptures suggest that when you say your Jaikara, say it so the moutains shake and the skies crack wide open!
at 3:50 PM

beautifully said!
is this visit possible in aug/sep also?
i was under the impression that it can be undertaken only in nov/dec

Yep, its a nice place. been there only once that too when I was little.
They say, you won't be able to go unless mata wants you to come.

I just love the place....Been their only once but can start anytime!! What a magnificiant journey all the way!! :) :)

@Prateek- yup thats right. The belief there is that unless you get Mata's Bulawa, you cant make it...

@Anon- It is just that... a yatra worth taking a hundred times over

i wonder who took those pictures! they seem to be very well taken!

u have a nice blog... i saw u at indiblogger...me and my hubby were planning to go vaishno devi but if time permits and god wills...

you have very interesting articles which strike the right cord...

@Satya- Thanks so much for your kind words... I am glad you liked my blog...

I did visit your blog- loved it!

Hope you will visit my blog regularly :)